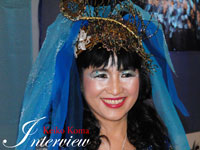 The dream we have cherished in our childhood
Are still alive and deep inside our lives.
Now we have grown up and encountered a new way of life
That allows us to realize these dreams in the actual society.
As we recover in ourselves
The original beauty of life.

The life of modern man is the outcome of human history, that has been inscribing onto each life numerous patterns of past life that we call destiny, innate character and features of constitutions. Seemingly different though the phenomena may be, the basic story is unchanged. Thus we are facing the turning point where a new consciousness shall emerge into our mind, acknowledging these man made patterns, liberating us from them and allowing us properly to grasp what is happening at the core of our life. This is the key to live a meaningful life that is true to the original command of life, exercising ones utmost ability and creativity in this world. The Idaki Counseling Courses are designed to provide people with this process of awakening oneself to one’ s rich internality and regaining one’ s precious light of life.

The Idaki Counseling Courses have been held over thirty years and their method was created by Master Idaki Shin at the age of 35 when he came to find a way to express through music, a dimension of life that has never been clarified whether by any conventional academic approaches or by verbalization. While his concert has been organized in many parts of the world and widely appreciated as a special music encouraging people to live a better life, exercising creativity, and enjoying the true state of health of mind and body, this course is the source and essentials of his performance on stage.

Basic Approach
Mr. Idaki Shin determined that the state of being of a man from when one is in the abdomen of one's mother to one's infancy determines the majority of phenomena occurring at present around one. What one considers impossible, a possible tendency to guard yourself too much against a certain type of situation, what one believe to be one’ s positive features, etc., are more often than not linked directly to the patterns formed during this early period of one’ s life.
A newly born life
Love, Health and Creativity
During pregnancy and infancy
Affected by negative factors formed out of one’ s ancestors, parents, social environment, mode and collective consciousness of one’ s era, etc. These factors determine one’ s personality, character, destiny, constitutions and condition of health.
Who you are now
Heavily dominated by outer environment such as daily work, family relationship, image made of oneself, etc. They are preventing one from discovering one’ s true nature and from exercising one’ s full ability.
▼
Idaki Counseling Course
▼
Liberated from negative factors and influences
through experience of acknowledgement and reception.
▼
LOVE
To understand the true meaning of love.

For those with general interests in every aspect of life who wish to live a better life. At the moment of birth life is shaped as a sphere that shines beautifully. It is originally born to exercise its full creativity, realizing health and love. However, even within three years of infancy, life receives numerous negative inputs from the outer environment. Or it starts to oppress one’ s sensitivity and demands on life after repeatedly experiencing the impossibility of one’ s true command of life being fully understood . One starts to follow a limited pattern of reaction towards the world that is later considered to be one’ s own personality, character and even some features of one’ s constitution. Master Idaki Shin has developed a special counseling method to tackle these negative factors that have heavily affected one’ s early life, and to liberate one from living a pre-destined life. In our course these factors are both acknowledged verbally and expressed by the sound of the piano. Master Idaki Shin responds directly to the internal condition and situation of each individual identifying them, taking them as his own, and expressing them by way of sound. Each note allows one to experience the original unity of mind and body, acknowledge properly what life is in need of, and regain the sensitivity and creativity that open up our future

For whomever wishes to realize oneself through one’ s business activity
Now that we are constantly facing change not only in the market environment but in our society and nature, a company is required to find its own bearing towards an unknown future. While it goes without saying that the state of being of managing members of a company directly conditions the performance of the company, it is indispensable to become oneself at first a specialist as a human being before becoming an expert in business. Namely one has to be always ready to open up one’ s own way with a clear global vision based on understanding the nature of humanity. The Idaki provides an opportunity to regain the original vitality of life allowing free development of sensitivity that leads to growth, the success model, better relationship establishment, enhanced creativity, vigor and health. Being special in this line shows the proper way every time there is a change of tide. Or you will come to realize that change is really another big chance for your life and your company. The strategic approach for us is not merely conceptual but to create a field for living that invites good opportunity.

These courses are available in various languages with a specialized interpreter and open in Kyoto and Tokyo at our counselling rooms equipped with piano. Please inquire further about details; schedules, fees and availability in your language, etc.
IDAKI Corporation:
IDAKI Build. 2F, 3-4-16 Roppongi, Minato-ku, Tokyo, Japan
TEL.(+81)3-3505-8841  FAX.(+81)3-3505-8843  Email. info@idaki.co.jp